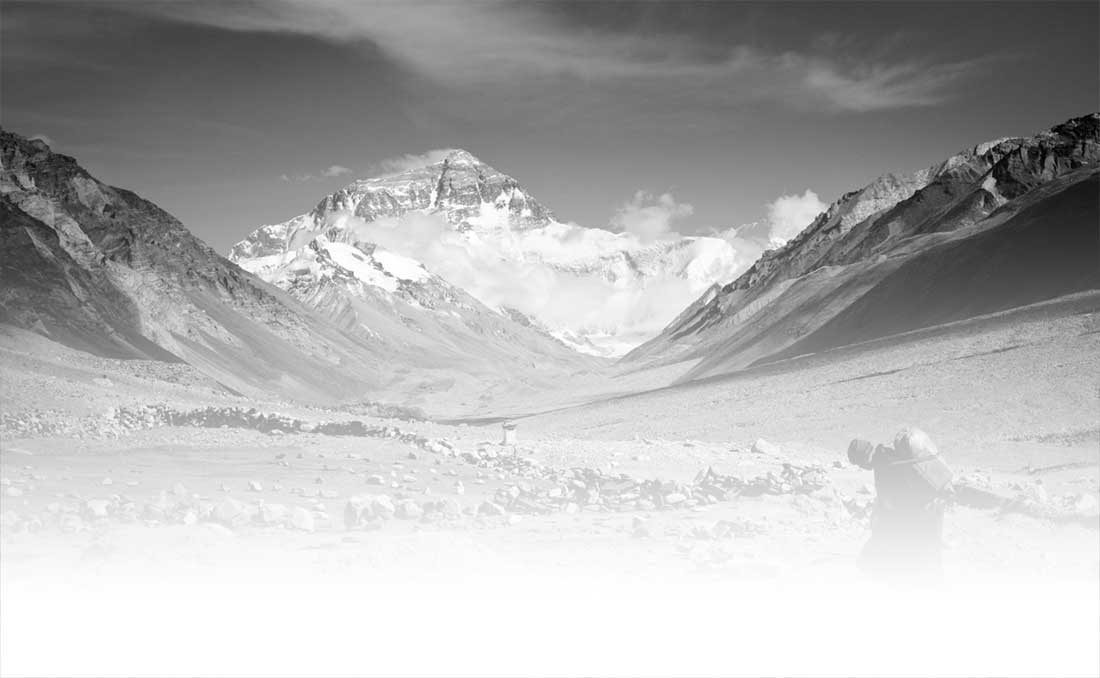 On Human Rights Day (the 71st year of UDHR adoption on 10 December 2019), the UN, EU and Human Rights Desk of DIIR, CTA makes a brief look-back on China’s human rights violations of ICCPR.

The 11th Panchen Lama: The boy who “DISAPPEARED”

BY JOSH CHIN AND SAURABH CHATURVEDI

BEIJING—Eight Tibetans were found guilty of inciting others to set fire to themselves to protest Chinese rule by two separate courts Thursday, state media said.

The sentences come as Chinese authorities pursue a hard-line approach to quell unrest in the country’s Tibetan regions.

China’s state-run Xinhua news agency said a court in Aba, a heavily Tibetan prefecture in western Sichuan province, sentenced 40-year-old Lorang Konchok to death with a two-year reprieve—a sentence commonly commuted to life imprisonment—saying he used his status to seek to convince eight people, including monks, to light themselves on fire.

His nephew, 31-year-old Lorang Tsering, was … Read more on Source

LOBSANG SANGAY, the elected political leader of Tibet’s exiled administration, is an optimist. On January 30th he addressed some 4,000 Tibetans, including MPs, who had gathered in a sports hall in Delhi as a part of four days’ of protest, prayers and debate. Mr Sangay dared to predict that the Dalai Lama, the Tibetans’ spiritual leader, would yet return to his homeland—once his countrymen had won greater freedom.

His assertion is threefold. First, he believes that “the human spirit will rise up” and overcome the repression and assimilation imposed by the Chinese authorities in Tibet. In that context he claims to understand, and even sympathise with, the 99 young Tibetans who have set themselves on fire in recent years. Many of them have died, and on January 31st China convicted a monk and his nephew of “intentional homicide” for having “incited and coerced eight people to self-immolate”.

Mr Sangay is also saying that, though the political change for which many Tibetans have long yearned may seem impossible today, given a mountain of latent anger and a spark, it can erupt unexpectedly fast. The Arab Spring or the fall of the Berlin Wall might be inspiration. Who is to say that Tibet won’t be next?

Last, most interesting, Mr Sangay is arguing that Tibetans could prove to be a “catalyst of moderation” for the rest of China. He estimates that there are 300m to 500m Chinese Buddhists (more than there are members of the Communist Party), many of whom yearn for greater cultural freedom in their country and could, under the right circumstances, sympathise with the Tibetan people and their spiritual leader. Ordinary Chinese, he believes, would also be attracted to the tolerance and openness of the Tibetan leaders.

They might like, too, the model of competitive and fair elections that Tibetans in exile (particularly the 100,000 or so in India) now use to pick their political leaders. Thanks to better communication—social-networking, the use of mobile phones inside China, greater travel abroad by Chinese civilians—a better understanding of Tibet and its politics might yet spread.

Mr Sangay’s appeal, and the march by Tibetans in Delhi on January 31st, is designed to counter a broader sense that the Tibetans’ political cause is flagging. Indian heavyweights are not shy of supporting the Tibetans in exile. At the gathering in Delhi, L.K. Advani, a former deputy prime minister and a senior figure in the main opposition, the Bharatiya Janata Party (BJP), gave a brief but rousing speech. He praised the Dalai Lama as “saintly”, lauding Tibetans’ for their appreciation of India and wishing them success. Congress, India’s ruling party, also sent along more junior political figures to cheer the marching Tibetans from the dais.

Yet India is beginning to look like an exception. Tibet’s exiled political leaders talk of the massive influx of Han Chinese to the towns and cities of the Tibetan Autonomous Region and other Tibetan areas of China; battling repressive security forces; schools that refuse to teach in the Tibetan language; and the arbitrary arrest and disappearances of monks and nuns. Nepal seems to be growing less hospitable to its exiled Tibetans by the year. And yet another battle exists: stirring interest farther abroad is growing harder by the year, in the face of China’s ever greater international and economic heft.

Speakers in Delhi grumbled that some democracies—such as South Africa—are quick to block visits by the Dalai Lama to avoid giving offence to China. For all the talk by Western leaders of promoting human rights, few would now dream of lecturing China in how to settle the dispute in Tibet. (Similarly, it is increasingly rare for any outsider to tell India how to resolve the long-running dispute in Kashmir.) At the same time, outsiders are preoccupied by the prospect of maritime disputes with China in the East China Sea, over the Senkaku/Diaoyu islands, or in the South China Sea. With so many pressing international problems, why should any outsider stir up difficulties over Tibet now? 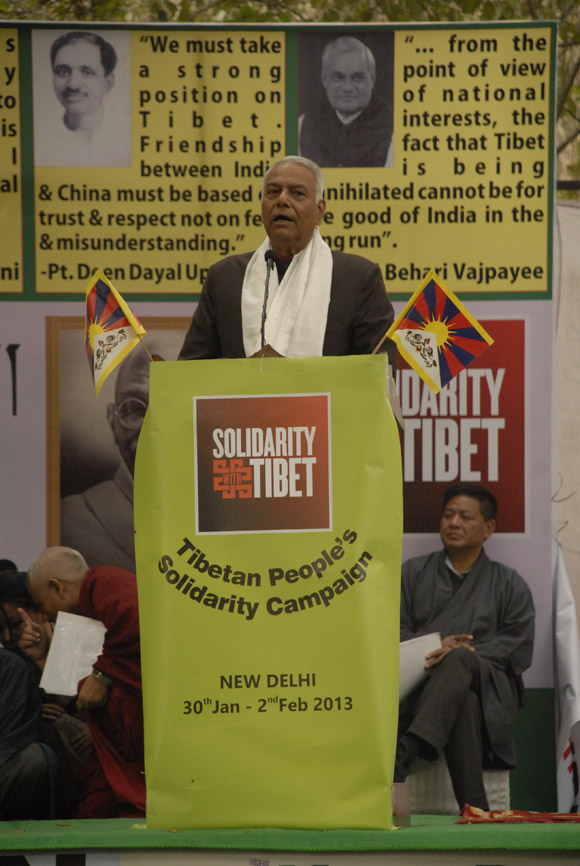 Shri Yashwant Sinha at the event

Over 1500 Indian supporters and 6000 Tibetans took part in the daylong event at Jantar Mantar.

Shri Yashwant Sinha, former Finance Foreign and Finance Minister and Convener, All Party Indian Parliamentary Forum for Tibet, began by saying that ‘Self-Immolation is the ultimate sacrifice an individual can make for one’s cause.’ And pledged to ‘work to invite His Holiness the Dalai Lama to address the Indian Parliament in March this year.’

Shri Ram Vilas Paswan, former Steel and Railway Minister and MP, Lok Janshakti Party condemned the atrocities committed by China in Tibet, and said that ‘he has written to the Prime Minister Shri Manmohan Singh to make efforts to resolve the issue of Tibet.’

Shri Ravi Shankar Prasad, MP, Chief Spokesperson and Deputy leader of BJP, said that ‘he had come here at this gathering not only as BJP official but also as a concerned human being to show his solidarity with Tibet.’

Shri Chandan Mitra, MP and National Spokesperson for BJP said that the ‘Tibetan struggle is representative of the struggle of people of the world who love freedom and peace’ and stressed that ‘Tibetans in Tibet have the right to live their lives with dignity.’ He concluded saying that ‘Tibet’s security will ensure India’s security.’

Shri Anurag Thakur, BJP MP said that his ‘party (BJP) was, is and always will stand by Tibet.’ Anurag condemned ‘China’s ever expanding control over Tibet and other regions in South East Asia.’ He emphasized that ‘Tibetans inside Tibet are compelled to resort to self-immolation’ and that ‘the time has come for Tibet and India to stand united and challenge China.’

Shri Alok Tiwari, MP, Samajwadi Party said that ‘his party has long standing relationship with the Tibetan issue since the time of Dr. Ram Mohan Lohia and Jaya Prakash Narayan’ and hoped to see a ‘speedy resolution to the Tibetan issue.’

Shri Jayant Chaudhary, MP and General Secretary of RLD said that ‘the Tibetan struggle is a struggle for truth, justice and a non-violent struggle’ and assured that ‘he will raise the Tibetan issue in the upcoming Parliament session in March this year.’

TPIE Speaker Mr. Penpa Tsering was the Master of Ceremony for the day. The 4-day ‘Tibetan People’s Solidarity Campaign’ concluded with the delivery of closing remarks by Sikyong Dr. Lobsang Sangay and the conveying of vote of thanks by Deputy speaker of TPIE,  Khenpo Sonam Tenphel. 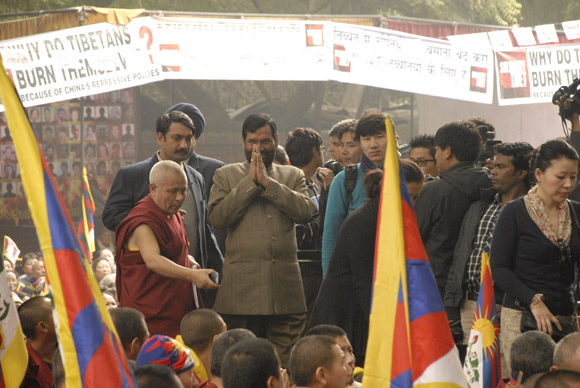 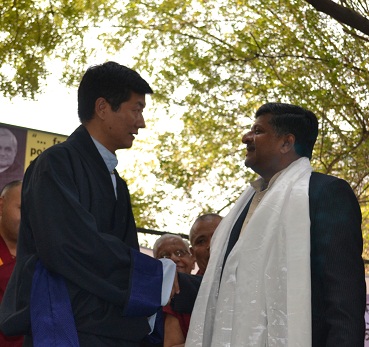 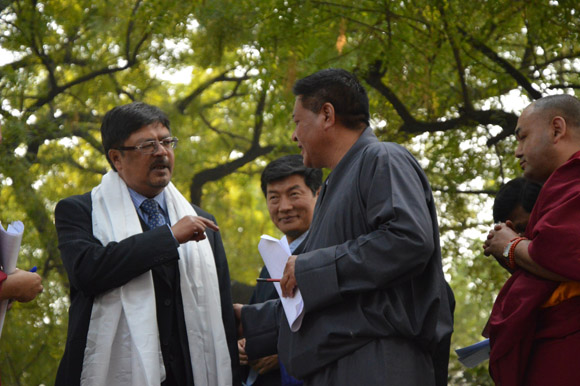 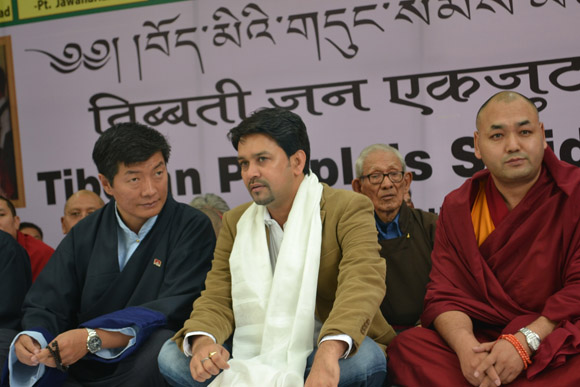 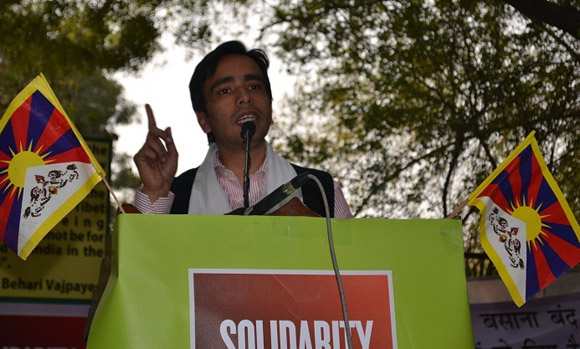 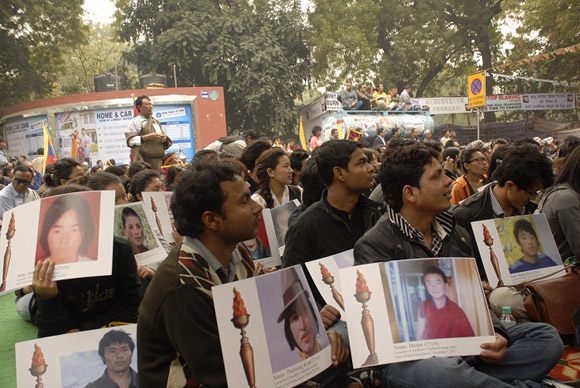 A section of Indian supporters at the event 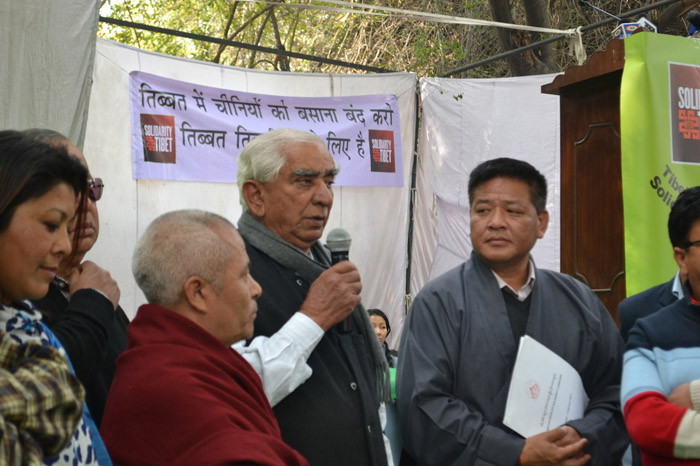 February 01, 2013, New Delhi:  The day-long prayer was led by His Eminence Gaden Tri Rinpoche, 102nd Throne-holder of the Gelugpa tradition of Tibetan Buddhism and the first of Indian origin.

Also present were His Eminence Kirti Rinpoche, head lama of Kirti monasteries (where more than 30 self-immolations took place since 2009), and the Tibetan leadership, including, Sikyong, Speaker, Kalons and parliamentarians. Over 6000 Tibetans took part in the public event, majority of them from monastic communities.

Alongside the campaign, for the last 3 days ministers and members of Tibetan Parliament in Exile met with senior officers of the India based United Nations Human Rights Council and foreign diplomats from 20 countries. The delegation headed by Religion Kalon Pema Choejor, Health Kalon Tsering Wangchuk, Thupten Lungrik, former Kalon and current member of TPIE requested the representatives to urge China to a) allow unfettered access to Tibet for the media, the United Nations and International fact-finding delegations to investigate and report on the real causes behind self-immolations, b) allow governmental, parliamentary and diplomatic delegations to visit Tibet in order to ascertain ground realities in Tibet, c) review its failed hardline policies in Tibet and address the genuine grievances of the Tibetan people by resolving the issue of Tibet through dialogue.

The diplomats assured support for the Tibetan issue and said that they will raise the dire issue of Tibet with their Chinese counterparts.

Shri Jaswant Singh, former Foreign Minister of Government of India along with his supporters paid a visit to the campaign venue. He expressed joy in seeing such a huge gathering of Tibetans and affirmed ‘support in finding an early resolution to the pressing Tibetan issue.’

In the afternoon students from TCV Gopalpur staged a 30-minute skit depicting the current situation inside Tibet. This moving depiction of the prevalent dire conditions in Tibet: clampdown on peaceful expression of Tibetan identity, moved the audience to tears.

H.E Kirti Rinpoche in his address emphasized that ‘the current tragic situation inside Tibet is the result of Chinese failed policies in Tibet’ and expressed that ‘the dire political repression and lack of any freedom in Tibet have forced Tibetans to self-immolate.’ He further stated that ‘if China has any evidence for the alleged involvement of Tibetans outside Tibet in the self-immolation, it should be placed before the outside world.’

At conclusion, H.E Gaden Tri Rinpoche addressed the gathering and expressed that ‘the self-immolations protests inside Tibet is in accordance with the principals of non-violence.’ H.E expressed his ‘deep agony over the tragic situation in Tibet.’

It may be noted that the 6000 Tibetans who have assembled in the ongoing campaign have come from as far as Ladakh, J&K, Sikkim, Arunachal Pradesh, Karnataka, Nepal, Bhutan and from certain pockets of Tibetan overseas communities. The gathering symbolizes solidarity of whole Tibetans across Indian subcontinent and the world. The participants have come voluntarily and on their own expenses.

The 4-day Tibetan Solidarity Campaign (January 30 to February 2) will conclude tomorrow. Representing the ‘All-Party Indian Parliamentarians Forum for Tibet’, former Foreign Minister of India Honorable Yashwant Sinha will address the gathering. He will be joined by other Honorable members of the Parliament and eminent speakers from the civil society including- Shri Ram Jethmalani (MP), Shri Satyavart Chaurtvedi (MP), Shri Jayant Chaudhary (MP),  Shri J.P Aggarwal (MP) and many others. 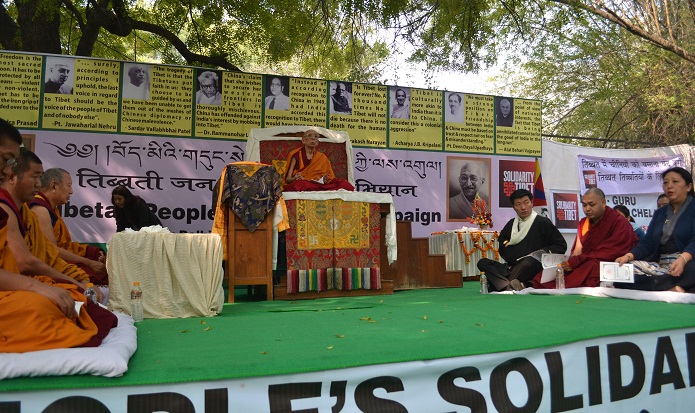 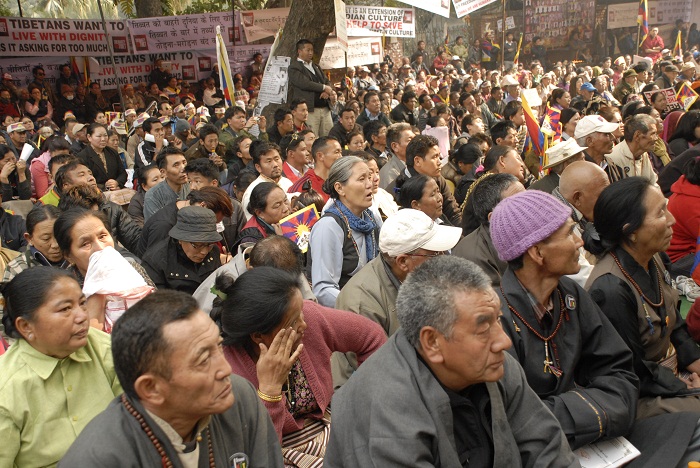 A section of crowd at Jantar Mantar 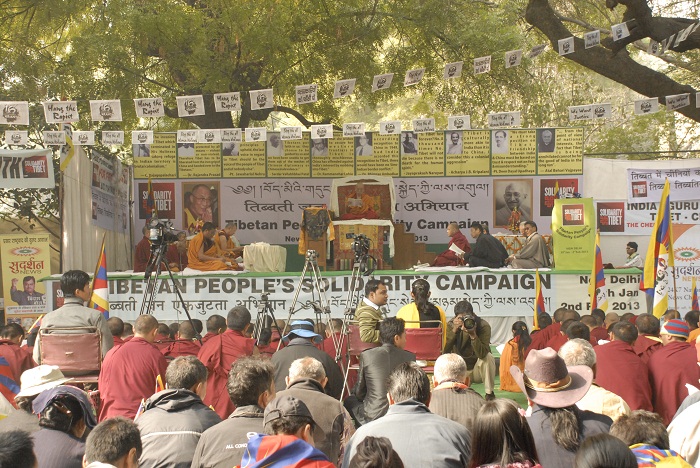 A view of the campaign 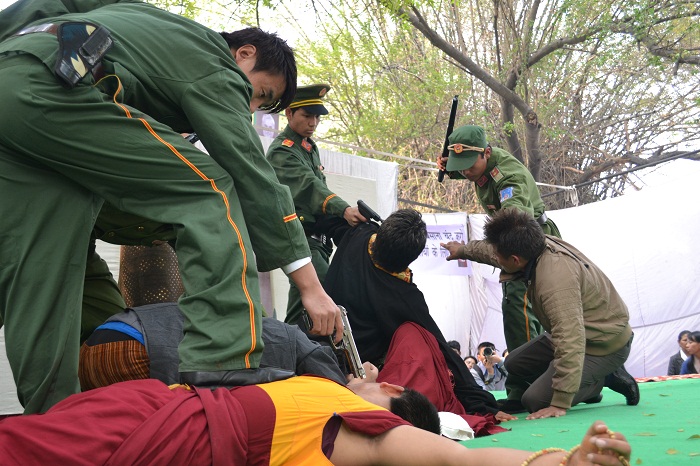 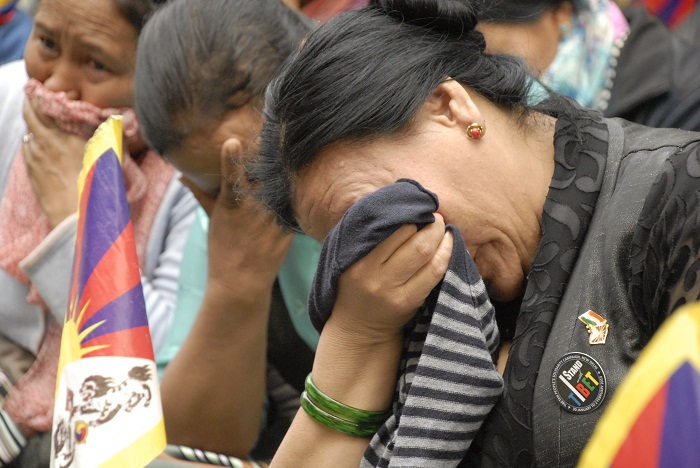 Audience reaction to the skit